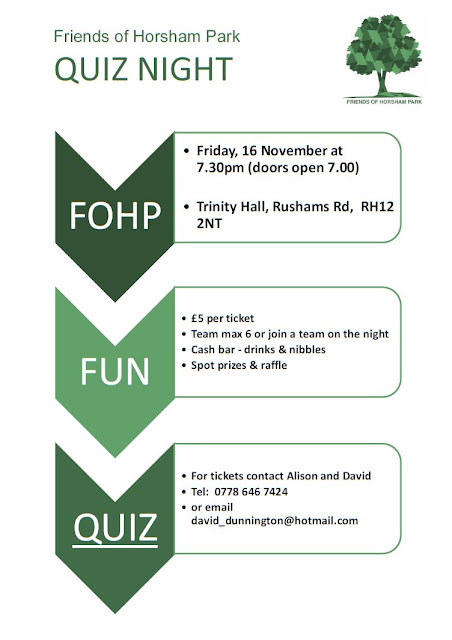 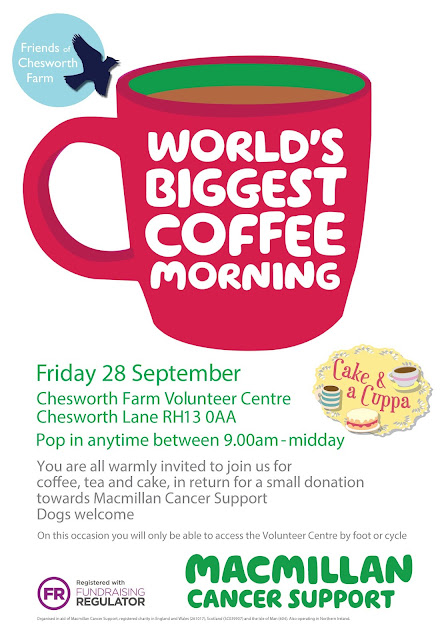 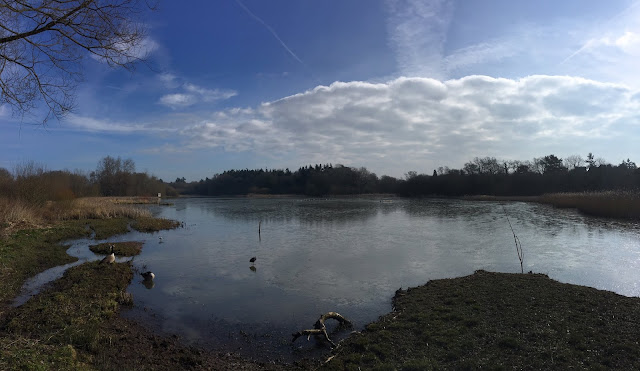 Please note that Tern Hide will be closed on Weds 12th September as the Warden team are carrying out some scrape maintenance to improve the habitat for the wildfowl this winter. The hide will only be closed for the day and we will reopen the hide as soon as possible. Apologies for any inconvenience caused.
at September 11, 2018 1 comment: 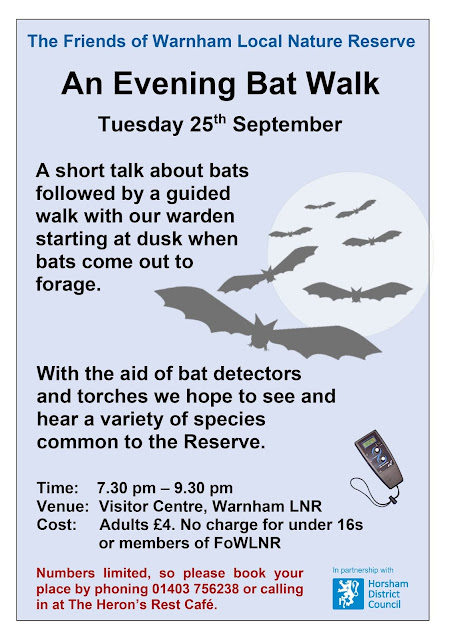 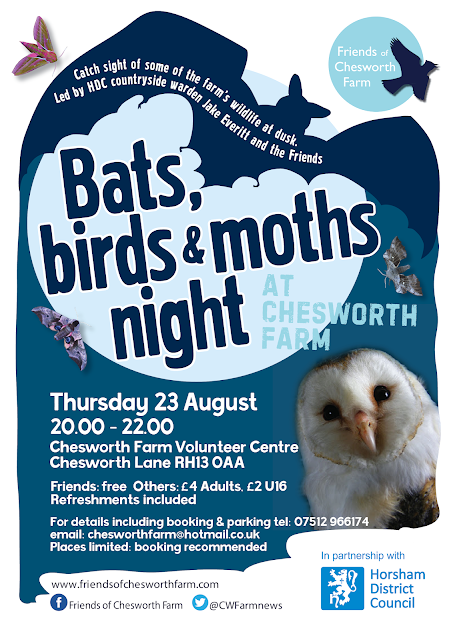 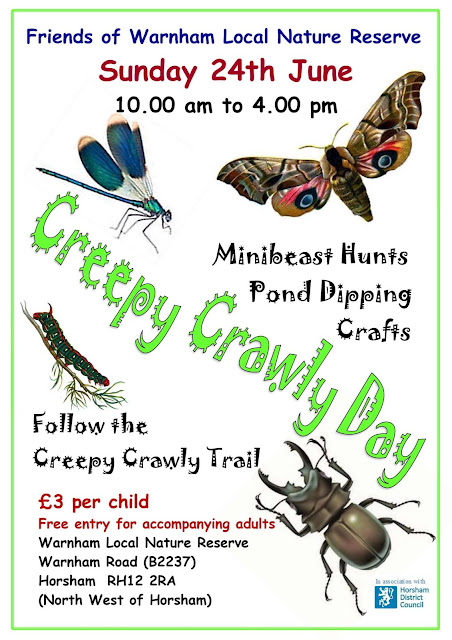 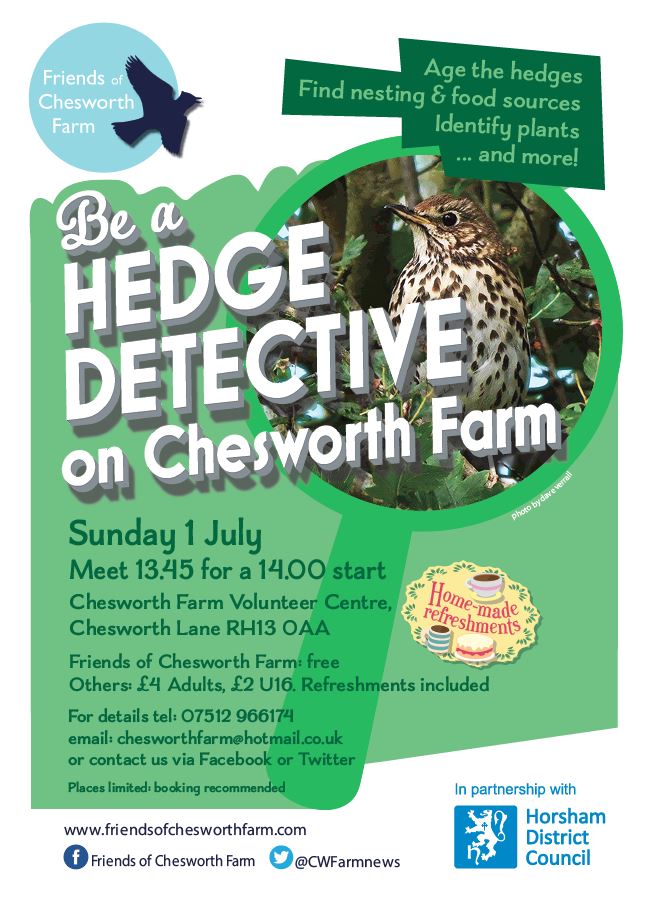 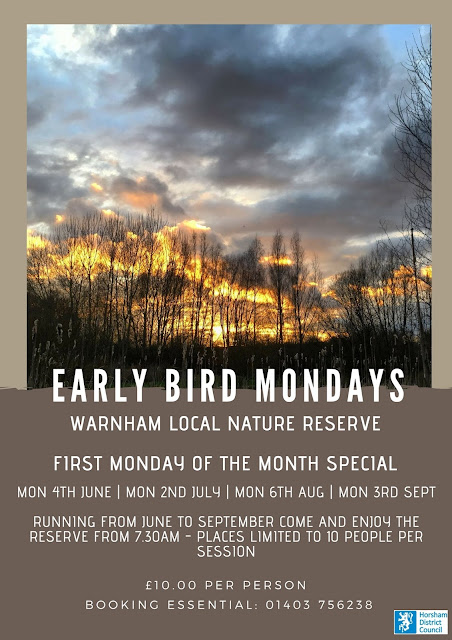 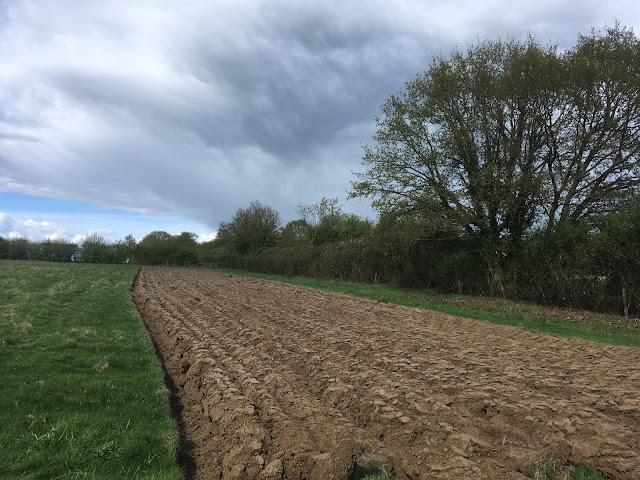 A very exciting time at Chesworth as this week saw the beginning of a project I have wanted to carry out on the Farm for many years. The project is taking place in Wheat Rick and New Town Nine Acre fields respectively and the more observant visitors to the Farm might well have noticed two plots have been ploughed this week.

The aim of the project is to sow several crops which we will not harvest but come the autumn will produce lots of seeds and grain to support the bird population which winters on the Farm, you may see these in the future being referred to on the blog as sacrifical crops. Species such as Linnet, Yellowhammer, Greenfinch, Goldfinch, Chaffinch and Reed Bunting should all benefit from the bounty of free food during the winter period and we hope they will use the nice big hedgerows to roost in and avoid predators from.

The next stage of the process is to power harrow the project area which will break the large clods of mud down into a fine tilth which will support the seeds and give them a better medium to grow in. We hope the weather will brighten up soon so we can get on with sowing the all important seed. These two plots are going to be the center of lots of attention throughout the year and I will keep you posted with how they are developing.

Around the Farm David Verrall has once again been busy finding lots of different species and this time he managed to get a lovely photo of a pair of Small Tortoiseshell butterflies which have been surprisingly few and far between this spring.


Lastly on the subject of Chesworth Farm, last Monday we have the Friends of Chesworth Farms' AGM which was very well attended. All of the formalities were swiftly sorted out and then we had a fascinating talk by Nick Sexton about his life living on the edge of the Farm. From a personal point of view it was fantastic to further my knowledge of the Farm's history though World War II and see how the Farm has developed over time. Very well done to all involved and to Nick and Angela Sexton for their wonderful talk.

A trip down to Leechpool and Owlbeech Woods at this time of year is a must as the Bluebells are just starting to fill the air with their sweet smell and the purple/blue carpet is just starting to cover the forest floor. It makes the fresh green leaves of the Beech and the perfect white trunks of the Silver Birch show up even more all giving an truly brilliant wildlife spectacle that is not to be missed.

Up on the heathland at Owlbeech the warm spring sunshine has brought a plethora of species out and about with Common Lizard and Adder seen this week mainly in the areas with Bracken and the Green Tiger Beetles are making the most of the bare earth areas. Plenty of butterflies are now on the wing with many Brimstone's seeking out the vast amount of Alder Buckthorn to lay their precious eggs on. Willow Warbler's are very evident with their melodic song being heard throughout the heathland, soon we hope to hear the churring of the Nightjar once more. 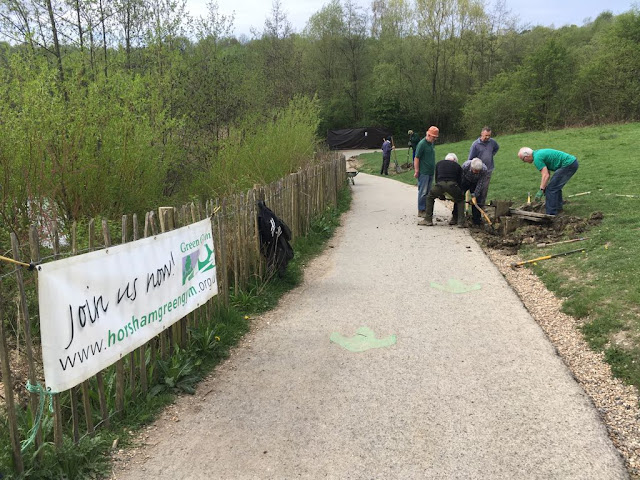 Horsham Green Gym have once again been busy down at the Country Park, this time they have been installing a new rustic bench on the beach area as well as continuing to improve the drainage around the circular path. This is the first of a number of small improvements we have planned around the Park before the busy summer season kicks in.

Our thanks as always to the volunteers at Horsham Green Gym for supplying us with immense support and skill. It does not go unnoticed around the district and we are always grateful.

The Reserve has been very busy whilst the weather was nice and warm and as a result there have been lots of wildlife sightings logged over the past ten days. David Verrall once again managed another excellent shot, this time of a male Orange-tip which was feeding for a change in stead of buzzing around the woodland rides.

We have seen a real increase in the number of summer migrants and passage migrants this week with Common Sandpiper being seen every day with a peak of three birds on the 28th April. The best place to see them in Tern Hide and they are often feeding on the muddy scrapes right in front of the hide. Sean Collins managed to get this fantastic photo of all three birds not only together, but together in flight!!!
There has been a marked increase in the number of hirundines on the Reserve this week with Swallow being seen every day as well as plenty of House Martins and a handful of Swifts too. Hopefully the Swift numbers will continue to increase over the next few weeks as the local breeders begin to find their nest sites once more and come on feeding forays over the millpond. Sean Collins also managed to bag a nice shot of the first returning Common Tern for the year which was exciting and as seems to be the theme this year it was about a week behind the 5-year average first arrival date at Warnham.
Many thanks to everyone who has sent me photos and any wildlife records, they make the production of the blog a lot more fun to read! Until next time...
at April 30, 2018 2 comments:

Spring has certainly sprung around the sites with lots of beautiful wildflowers beginning to put on a show as well as the dawn chorus of our birds really starting to spark into life. Down at Southwater Country Park the pair of Mute Swans on Cripplegate Lake have made a nest right next to one of the paths so we have had to temporarily close this path off to reduce disturbance to her as she lays and incubates her eggs.

Two of the wardens went to check on her progress yesterday and she looks to have been pretty busy, when she eventually stood up Jo and Andrew could not believe their eyes. She had laid 8,  yes 8,  eggs in her beautifully crafted reed nest!!! I am pretty sure not all of the eggs will hatch as some of them were laid in the cold snap which could have affected them however we could potentially have 10 Mute Swans in a few of weeks time!
Staying at the Country Park, I also stumbled across the larvae of Phyllonorycter leucographella which is a micro moth. This is one of a huge number of leaf-mining moths that can be found in Great Britain. You can see the mine in the photo above which stretches like a blister across the midrib of the leaf. The mine is created by the larvae of the moth eating the inside of the leaf. The species is fairly common and can usually be found where the foodplant of the larvae grow which is this case is Pyracantha.

The Easter Scavenger Hunt was a great success despite the inclement weather and all of the children who attended were rewarded with a lovely Easter egg. Many thanks to the Friends of Chesworth Farm for putting on such a good event.

If you have visited the Farm over the last week or so you may well have seen more flowers starting to appear around the site and you also might have been lucky enough to hear Chiffchaff, Skylark, Blackcap or Willow Warbler singing their hearts out as the males try to attract a mate for the breeding season. Keep an eye out for the bright yellow Lesser Celandines which are putting on a nice show by the Volunteer Centre.

Horsham Green Gym have once again been pulling out all the stops up on the heathland at Owlbeech Woods and this time they have been creating bare areas on the heathland soil which helps all sorts of invertebrates as well as ground nesting birds such as Woodlark and Nightjar.

They have also managed to create more hibernation habitat for our reptiles an amphibians such as Adders and Common Lizards, all of which are regularly seen on the sandy soils at Owlbeech. One of the volunteers also managed to spot a Grass Snake whilst at Owlbeech which was our first of the year here.

The Reserve is finally starting to dry up after a very very muddy Easter Trail meant that much of the site was only accessible in wellington boots! Over 350 children came for the wildlife themed Easter trail which was excellent. It was so nice to see children enjoying the site even if the weather wasn't particularly pleasant, once again thanks to the Friends of Warnham Local Nature Reserve for their running of the event.

There is plenty of evidence of spring in the air here too with the Heronry becoming more active by the day with plenty of well grown young starting to make their feelings known about the need for food from their parents. This week has also seen a large arrival of spring migrants to the Reserve with Chiffchaff and Blackcap seemingly singing from everywhere as well as a couple of Willow Warblers which are singing from the willows around the Aston Trelford Hide. We have finally manged to get a tiny bit ringing done which produced the first spring migrant of 2018 which was this lovely female Blackcap.
Finally our warden Ryan and Horsham Green Gym managed to witness a truly amazing spectacle up at the Sandpiper Hide scrapes of grotesque proportion. Whilst doing some maintenance of the scrapes the volunteers found several huge black masses out into the open water, on closer inspection they were actually tadpoles and thousands of them! Below are a couple of pictures of them, has anyone else seen as many tadpoles in one group?! 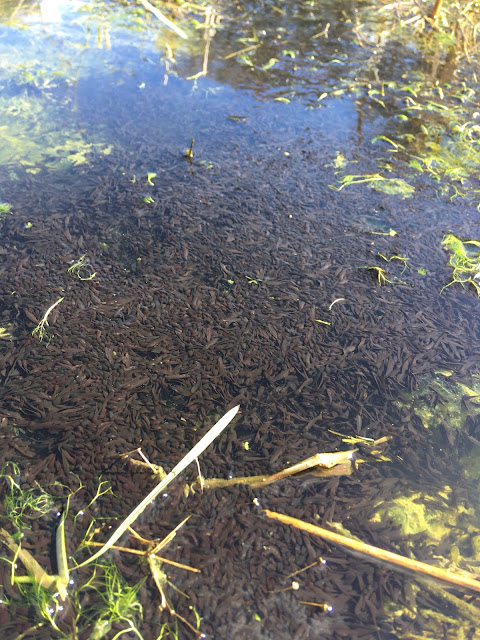 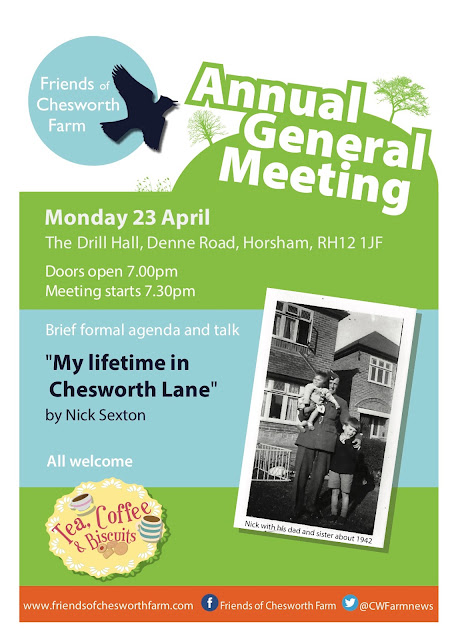 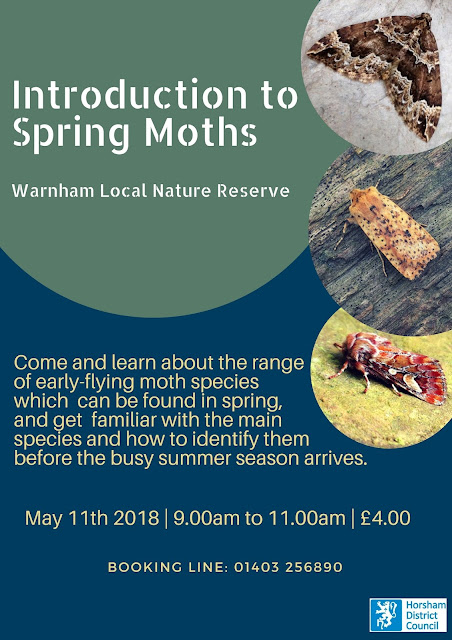 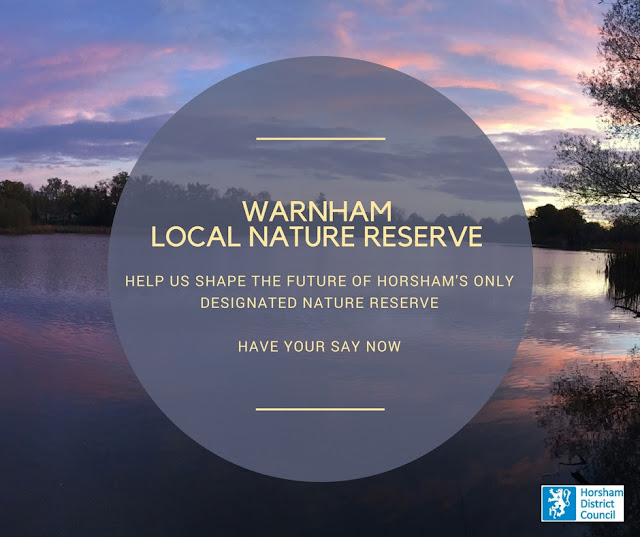 We need your views about Warnham Local Nature Reserve. Please give us your opinions on the management of the Reserve and what improvements you would like to see, to take our short survey please go to:
http://socsi.in/ESGU8

We know how much local people value Warnham Local Nature Reserve and we are always looking at ways to improve the experience there. At the same time we appreciate that some people do not visit it, and we would like to know why.

The survey will help the Council understand what people would like to see in the Nature Reserve and help us direct future spending and funding as part of our management plan.